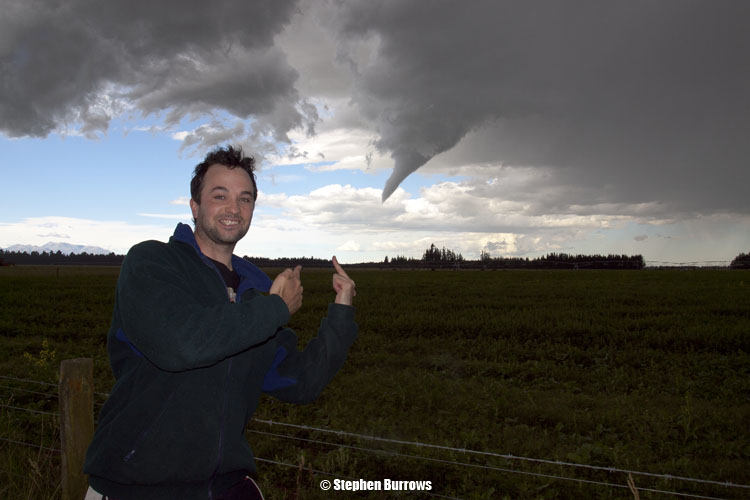 The first chase day of the new year and we get a tornado!

A couple of day’s out from this event Stephen and me looked at weather models and we saw there was a cold pool of air high up in the atmosphere floating over North Otago through to Mid Canterbury what looked like Thursday morning and just into early afternoon on the 3rd of January before it slipped away out to the east.

We thought things would have to develop fairly quickly for anything to get going as the unstable air appeared at first glance to not last all afternoon, although GFS was suggesting unstable conditions through to 7pm so that was good even though it modelled the upper air to get a bit warmer. Surface temperatures / moisture and good convergence must’ve been enough to overcome the cold air slipping away. Metservice were fairly confident also on their thunderstorm outlook that storms could occur late afternoon and into early evening before dying away, they also mentioned the possibility of a funnel cloud or tornado happening on this day so that worked out quite well.

I had to go out to Mount Somers on this day as I’ve just bought a place up there and had organised for the power to be hooked up on the 3rd of January. As there was a chance of storms also in South / Mid Canterbury the timing worked out well. We were up there by 1pm and nothing much had occurred but some development slowly trickled along as the afternoon progressed so we hung around.

This was the sky eventually at 4.40pm as things started to look better.

The old haunt thunderstorm corner started to look quite good at quarter past 5, thunderstorm corner being Mount Peel of course, aptly named by John Gaul for it’s higher frequency of thunderstorms occurring in that area then other places around Canterbury. An area of cumulus started shooting up to the right of us also and looked strong, even though at that stage it was just humble beginnings it would be something to keep an eye on.

A few strikes of lightning and big rolls of thunder were now coming from Mount Peel around 5.30pm and then our first funnel of the day developed, only small but definitely caused some excitement between us. As this funnel weakened there was actually another rope type funnel that seemed to come out of the same area but it was hard to photograph as it seemed to just blend in with the cloud behind it, it didn’t last long.

Then low and behold, the strongly developing cumulus to our right started to push out this scraggly lowering right infront of us at 5.50pm! This thing turned into a fairly nice funnel cloud and for a time turned into an actual tornado. It went over the small country town of Mayfield and touched down in the golf course there uprooting some big trees and tossing branches about. The condensation funnel never reached the ground however after seeing the news reports that came out later and seeing a zoomed in shot of one of my photo’s showing some debris / rotation at the surface we can therefore call this a tornado.

Even got a few typical chaser / funnel photo’s, would’ve helped it I was pointing more at it but oh well. Me on the left and Steve on the right.

This funnel / tornado lasted for just over half an hour which is pretty good going for a New Zealand based event of this type! There was actually a larger thunderstorm with possibly even a bigger funnel this day near Oamaru but doesn’t sound like it damaged anything so not many heard about it. Finally after this funnel got sucked up back into it’s attached cloud another funnel started up behind us although this one wasn’t as big and didn’t last too long much like the first, still pretty cool though. That made a total of 4 funnels for the day! Most I’ve ever seen in one day.

Now for some more good stuff. Stephen was videoing this whole event for us and it makes great watching, ok it’s not an American tornado that is ripping stuff out’ve the ground left right and centre but it is still excellent viewing considering this happened here in NZ. This video was even picked up by Reed Timmer from the famed Discovery Channel series “Storm Chasers”, Reed runs his own show now which can be seen at tvnweather.com, Stephen’s video was put up on tornadovideos.net via youtube. Make sure to watch it in HD!