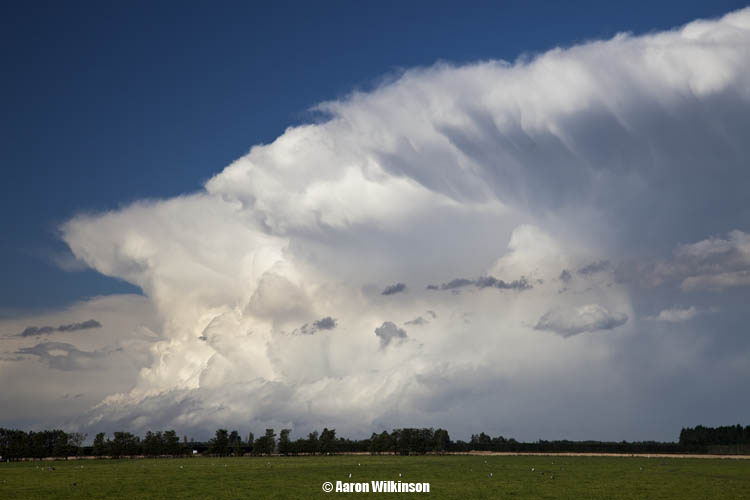 The situation coming up looked likely to produce thunderstorms on the West Coast of the South Island (and they did happen there) but not until the Saturday morning before these storms happened on Sunday did it become clear that storms would likely develop on the East Coast aswell! Once this became apparent all systems were go for storm chasing possibilities in Canterbury. If storms are looking likely on the West Coast and East Coast on the same day I’ll take the East Coast storms anyday unless the setup for the west looks exceptional. Also later in the evening another opportunity presented itself with a strong cold southerly trough due to hit Banks Peninsula around 11pm.

I teamed up with Jason Tippet and Mike Stewart for this chase, Stephen Burrows was coming back from a weekend in Kaikoura and got the storm as it headed up near the coast at Birdlings Flat which is good as we were further south at that point in time.

We headed south along State Highway 1 around 2pm, storms look to of already developed in the Fairlie area so we would hope to intercept them around Ashburton as they moved north. Conditions were looking quite unstable just south of Christchurch, quite a few farmers were doing burnoffs and there were a few pyrocumulus forms about. Once near Dunsandel we could see the Cb anvil to the south of this developing storm, in Ashburton the skies started closing in. Saw an interesting spectacle I thought once in Ashubton, there was some burnoff smoke in the air and as a southerly wind change was moving through you could see it’s form because of the smoke. So if you’ve ever wanted to know what a wind change looks like and the boundary it develops then here you go!

Looking at radar we could see this storm was very close just south of Tinwald where we went down Long Beach Road, fellow chaser Ben Rodriguez had already intercepted the storm near Orari with some big hail up to 20mm in diameter. The skies were looking black and lightning and thunder was going off to, I was mucking around alot with my photography gear trying to set up for lightning photographs but with the rain falling it made it very difficult and I got nothing in the end! You’ve got to try though I guess. As the rain started getting persistent we had to move and crossed onto the western side State Highway 1 where it looked dryer, once there around 3.35pm it started hailing however but it was awesome! Hail was probably around 10 or maybe 15mm in size at most and was hitting hard!

The hail seemed to clear fairly quickly and the cb seemed at first to be racing off north, it provided some great photo opportunities but for one reason or another we didn’t follow it strait away as figured it would be moving to fast to catch. In hindsight however we should’ve gone after it as it was the best storm of the day. It moved north fairly quickly then stalled before moving east offshore, this storm had some amazing strength and was still going off around 10pm at night way off the coast, you could see distant flashes of lightning coming from it! The storm also caused some damage to a farm in Leeston downing trees, it doesn’t look to of been a tornado but instead strait line winds perhaps. The third photo below I took appeared in The Press the following Tuesday with an article about the storm, I took that photo at about exactly the time the damage was caused in Leeston and it would’ve been right under those clouds. The second photo below I wonder if it might show some rotation due to the banding / circular nature of the main updraft on the right but I couldn’t be sure, Metservice did note that they saw a few hook echo’s on radar so maybe.

We decided to chill for a while in the same area, a small cell started to develop inland around 5.30pm. While not powerful it did look good with the various lighting conditions, it did produce a nice hail shower that we drove through. The now distant Cb from earlier was still there off the coast of Birdlings Flat and produced some amazing mammatus, best I’ve seen for a storm here. Wish I was closer to take a better photograph with the setting sun but oh well, one thing we were waiting on was the arrival of a trough that was to come up later in the day. Ben Rodriguez came and joined us in this spot for a bit, in the sixth photo below Ben is on the left, Mike in the middle and Jason on the right.

The long awaited trough was certainly taking it’s time, we decided to head northwards towards Banks Peninsula around 7.50pm and wait for it there. We saw the odd big flash occur from clouds offshore that kept spirits high that something would happen. Once at Birdlings you could still see the occasional flash coming from that original Cb of the day now way offshore to the east. The outline of the clouds to the south was hard to see with our eye’s so I took a few long exposures with my camera and cranked up the ISO to see what we could make out, even managed a shooting star! An approaching Cb looked ok, nothing special but we were hoping for just enough to get some lightning on camera. When the trough hit man was it strong, really had to brace yourself and try not to get blown over. Sea spray or rain was horizontal, I’m estimating winds would’ve been a strong gale perhaps bordering on storm force winds, 9 to 10 on the Beaufort scale. A few flashes of lightning did develop but nothing more really, there was literally only a couple of flashes and I didn’t manage to capture any with my DSLR, Mikey did with my video camera though so that was good. After we realised the action wouldn’t get any better we decided to head home around 11.30pm, what a long day but was alot of fun.

As I noted earlier Stephen Burrows got out after a weekend away in Kaikoura and caught up with the big Cb of the day around the Birdlings Flat area about 5pm, he managed to film a few great CG’s and saw some amazing mammatus as the storms anvil moved over. Here is a couple of photo’s and a lightning still from his video camera, superb! Stephen saw the area of cloud about Leeston from a distance that caused damage to a farm but noted it looked messy with hail falling, no tornado visible to him.

And finally the article that appeared in The Press the following Tuesday regarding this storm, thankyou to Paul Gorman and my Dad for scanning the article so I can put it up here.