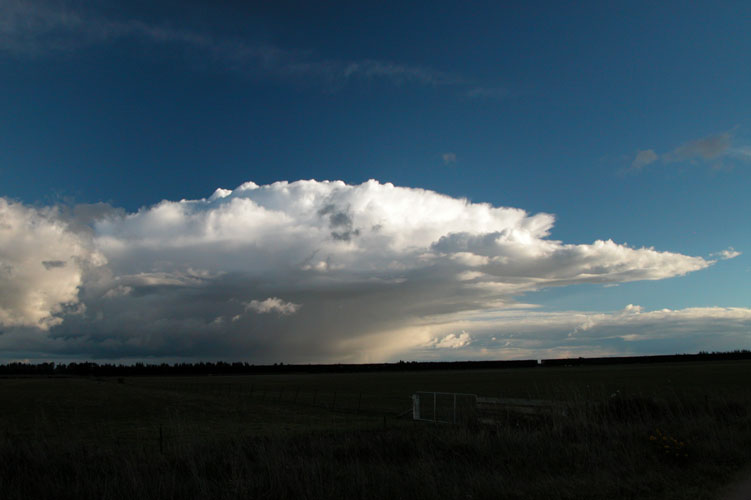 There seemed to be not much unusual about today. I saw it was sunny with bits of high cloud about in the morning but didn’t expect anything. I got on the net to do my usual analysis runs to see if anything was likely, nope…I couldn’t find much that indicated storms. The pressure was low at 988 hpa with a broad area of low pressure of the east coast of the South Island but being early August I thought it was to early in the year for things like this to start happening, hence the title of this report. I saw the outside temp was at 12 degrees and the dewpoint was at about 7 degrees which is a bit higher than usual (the dewpoint that is) for Christchurch but it still wasn’t high enough (in my mind anyway, the atmosphere had other plans).

So I continued doing whatever it was that I did and did notice small Cu towers going up to my right over Banks Peninsula around 1:50pm but wasn’t sure at that point as to do anything. I went on the net to make sure, and by criky! there was a nice formation of Cb’s on the Canterbury Plains initially starting from Cheviot (North Canterbury) going in a sort of curved pattern all the way down through Darfeild with one of their anvils or the storm themselves still going up over the Southern Alps and ending over on the West coast just south of Hokitika! The Modis satellite picture for this day shows you exactly what I mean! I went outside onto the roof and noticed the Cu towers had gotten slightly bigger and saw there was some more Cu brewing to the south, I wacked a polorising filter onto the camera so I could bring those clouds out more.

I just haven’t had the experiance to have that gut instinct feeling if anything was going to happen, John Gaul (NZTS President) on the other hand does and noted on the forum he knew something was up. One way to tell if the atmosphere is unstable is the sign of castellanus clouds about which John had told me about but which I forgot to note earlier in the day. Castellanus clouds are pratically Altocumulus in the mid layer of the atmosphere with small turret like forms on them, hence their name castellanus becasue they resemble in places the battlements of a castle. On with the report!

So I gave my freind Stephen Burrows a call and him being the storm enthusiast he is, woundered if he was ok for a chase. He was up for it so he came round to my place in Southshore and we had a look at the Cu developing near my place into a congestus state which it then went to Cumulonimbus. It looked good but we couldn’t really follow it as it was going to drift offshore soon. We then got in the car and traveled north down the road a bit and took a few more shots eastury side and then decided to leave that cloud alone to focus on the clouds developing to the south. We were off!

We traveled down Dyres Rd and went towards Chistchurch city our main goal being to get to the Halswell / Taitapu area as that looked to be where this cloud was sitting over. As we got closer the base came into view showing no precipitation, it was quite high but looked good, this cloud can be clearly seen on the modis satellite picture lying from the Halswell / Tai Tapu area through to about Leeston. There was another big blob of cloud right behind this one extending through to and slightly beyond the Rakaia river but we couldn’t see it due to us being in a car and not being able to see everyting going on. That’s where satellite pictures can come in real handy becasue you can see what clouds are forming and where they’re going so you can chase them. A laptop setup in the car would be a great thing to have but for the meanwhile I’ll just have to use my eyes and general knowledge on what’s likely to happen.

It was now just past 3pm and this cloud had gone to Cb which we could see towering up infront of us as we traveled towards it in out car. We got under the base which was pretty dark and mean looking but alas it didn’t seem to be doing much in terms of lightning and hail so we got some footage of it and ventured out onto the plains more after other fodder.

Just out of Tai Tapu we saw dark bases to the west with rain swathes coming out of them so we decided to head for there, it was in a sense still part of the same line that we photographed at Tai Tapu except a different Cb cell. We looked back towards where we just came from and then continued westwards. As we got closer the cumulonimbus’s base came into view and we observed it for quite a bit but unfortunately there was no lightning to note which I was surprised at as everything looked great

We traveled on past Burnham and then through Charing Cross and got out to have a look around at 4:00pm, the wind was pretty calm as it was for most of the day. There was dark cloud even further to the west which we had our eye on and also noted the Cb that we first looked at earlier on was beginning to precipitate and move over Chch. John Gaul later told me he had some good rain and small wintery type hail about 5mm in size at the most, nothing too note worthy. There was also no lightning observed either from the Chch Cb although at home later on in the day I could see some very distant flashes from this Cb way out in Pegusas Bay as it went off towards Cape Palliser (lower North Island) and then later intensefied. So, we saw this dark cloud to our west and went for it but just before hitting Darfiled the decision was made to turn back as the cloud looked to be raining quite a bit so it was all downdraft, besides, it was getting late in the day and the prospects that other clouds could pop up closer to Chch seemed good so we need not go any further. It did though produce some lightning strikes near the foothills but it was to far away and we were probably at Tai Tapu when that happened.

So turn around we did back towards Chch but the day wasn’t over yet! More towering cumulus had formed behind the line that was going through and looked good. The dissapearing line looked good aswell, you could see nice big bubbley Cu congestus going up into wispery anvils forming the various Cb’s along it. Very nice indeed it was! We constantly kept pulling over to the side of the road when a photo opportunity arised, it was quite funny. Luckily there were not many motorists about as they would’ve thought we were quite bizzare!

New areas of cumulonimbus were building now to the south behind the dissapearing line which looked fantastic, they weren’t huge and they weren’t active but it looked good. Now being around 5:15pm we decided to head back towards Chirstchurch because there didn’t look like there was going to be any night time shows of lightning. We pulled over some more on the way back to snap off some pics of the earlier line as it dissapeared out into Pegusus Bay, quite a sight with it’s fiberous top. The photos don’t give it much justice but it’ll give you an idea of what it was like. There was even some more Cu building into a Cb much further to the SW but it was to far away, by the looks of things it did nothing anyway.

So off we went home via State Highway 1 back through Burnham and then through Templeton to Christchurch. A good day had with 100 and something kilometers done, didn’t seem like much, I guess that’s what happens when your having fun! When Steve dropped me off at home we saw Cu (maybe weak Cb) trying to do something just out west beyond Chch but the day had finished for us, it did nothing anyway!