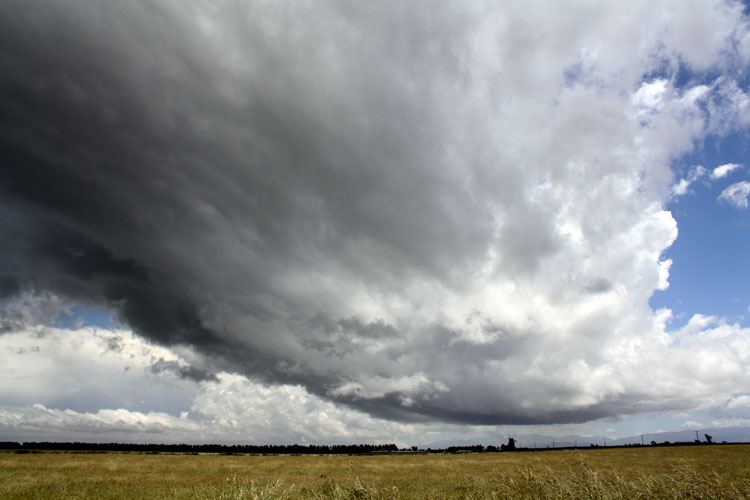 A great set up was on the cards! Very cold air (-27C  500mb) was moving over the South Island dragged up by a front which moved over the night before. A surface trough moved through in the afternoon and thunderstorms were the result!

There were some features about this day that did make it better then other days, there was a good northeasterly wind before the southwesterly came through giving a good convergence and provided good surface moisture, there was no cloud cover to hinder convection so things developed very nicely. I couldn’t say looking first off the shear was fantastic but these storms did form on the edge of a jetstream in the upper levels so that would’ve helped development, and of course the very cold upper air which meant hail!

This all developed on a Monday and normally I would be at work! But luckily I talked my boss in to letting me take a half day of annual leave, he let me so it was all systems go! Steve scrambled to get the afternoon off aswell which he managed so we met up then headed inland to begin the chase! By this stage a Cb had already blown up with it’s anvil hung over the city but as the main change hadn’t come through yet we figured there was more to come which there certainly was, we saw some mammatus as we headed out down Straven Road.

Once out west onto the plains we saw further development and took some photographs, we would’ve been out somewhere near Horarata.

Things looked promising and we stuck on a cloud that got quite dark and big. We slowly followed it north and lightning did start to happen along with some hail which started falling, not huge but something. Still, the southwesterly change we were expecting hadn’t arrived yet so we were wondering. While exciting looking we decided to head south as we could see a meaty looking line moving up from the south on radar and this was we suspected the main front coming through, Metservice had also just put out a severe thunderstorm warning for this line / cell we could see on the radar to the south so it made sense to go after it.

This is where the chase went all wrong for us and I still cringe that we made the wrong decisions this day. While on the way to the cell further south we got a txt from another storm chaser friend Ben that a funnel had formed near Waddington out’ve the dark cloud we were initially on!!! We turned round and started heading back to where we originally were, but on the way it became clear we couldn’t catch this cell to the north as it was now too far north. So there we were in the middle of these two cells with clear sunny skies above us! Realising the cell to the north was to far north we headed back south again and waited for the second line to come through, unfortunately by this stage we didn’t experience any lightning or thunder. The gust front looked quite good but for some reason the cell had run out of steam.

Still, the chase was ok and atleast we were out there. Even gave some footage to TVNZ and appeared on the news the next evening regarding the storm to the south which dropped big hail in the Methven area. Worse was to come though, a few days passed and then an article appeared in the Ashburton Guardian about that big thunderstorm to the south. It mentions that a farmer saw a tornado estimated at around 80 to 90 metres wide in the Methven area around 4pm. Going back we realised we were right on que to see this storm and were about 15km from crossing the Rakaia Gorge when we turned back to try and get the funnel to the north, if we had’ve just stayed on course and kept going south we possibly would’ve seen this tornado and got the big hail that fell that day. It was unfortunate we missed it but I did learn from that situation, I tell ya. Here is the article and picture of the trees it damaged.
Twister slices through farm, By Susan Sandys – December 17 2009
A twister ripped through the Methven farm of Ross and Adrienne Richards on Monday, damaging buildings, slicing huge trees and cutting a swathe through crops.
“We were incredibly lucky really. You can see the line it has taken, it’s just missed the house,” said Mr Richards as he assessed the damage on his property yesterday.
The twister was accompanied by spectacular lightning and preceded a ferocious hailstorm, which caused more than $1 million damage to crops on farms throughout Methven, Lyndhurst and Mayfield.
A digger operator working on Mr Richards’ farm at the time witnessed the small tornado.
“It was collecting everything in its path,” he said.
He estimated its width to be 80 to 90 metres, and it had cut a path through crops the length of the farm, doing more damage than the hail.
“You can see one part of the paddock (of crop) lying one way and the other part lying the other way,” he said.
The worker said he had seen twisters before.
“You get them in the harvest, but you only get wee ones when the weather changes, but this was very, very wide and very, very strong,” he said.
Mr Richards did not see the twister, and almost could not believe one had hit his farm, but had no other feasible explanation for the damage.
About half a dozen 20-metre tall trees in a plantation had been topped to a third of their size, while surrounding trees were unscathed.
Nearby a garden shed was flattened, a hay shed had its roof lifted off and large hay bales tossed outside.
Two huge 130-year-old macrocarpas were felled.
A 40-metre high Wellingtonian was cut to two thirds of its height, and the weight of its trunk pierced into the lawn near the Richards’ home, partly burying itself.
Mr Richards said he had lost about 20 trees.
He had been working in the farm’s woolshed when the storm hit, and said the sound of the wind and hail had been deafening. Adrienne and their two sons Bryce, 14, and Douglas, 11, had been inside the house, staying away from windows.

Pictured: Methven farmer Ross Richards surveys the path a twister took through a plantation on his farm. – Photo Susan Sandys

Story and photograph courtesy of the Asburton Guardian

Ben got some photos of the funnel near Waddington so here they are, and I’ll include some video he took of it when he was out in the video section below.

Steven Graham got a fantastic Panorama of the southern thunderstorm line that moved through, a nice big gust front!

TV One news report below which appeared the next evening (15th December) and a chase summary video from me and Steve. When the TV One news item screened they or me for that matter hadn’t heard about the tornado by that stage. I’ve included footage from Ben Rodriguez at the end of the chase summary video when he was observing the funnel cloud, the auto focus must’ve been on while he was filming hence the back and fourth at times.