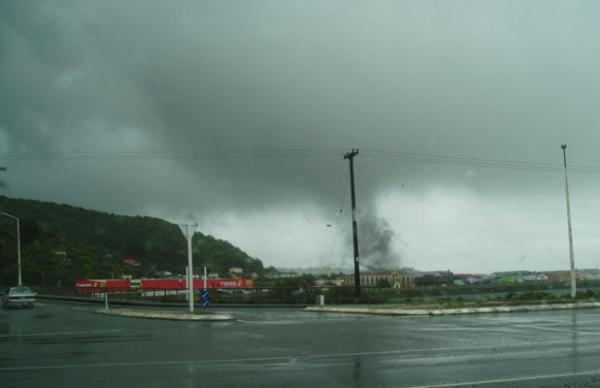 What an event this was, unfortunately I wasn’t able to be in Greymouth at the time. I probably would’ve been working which puts a stop to any storm chasing activities. Oddly enough Stephen Burrows, Steven Graham and myself went to Hokitika only a week before this happened in the search of thunderstorms which ended up being a failed trip. Managed to pick up some great carrot cake in Hokitika though so that was a bonus!

Even though I wasn’t there I thought it would be worthwhile putting up a report due to the scale of this event, below is a map that was shown in The Press the next day of the tornadoes path and news coverage that was shown in the evening on TVNZ is at the bottom of the page. The kind people from The Press have set up a gallery for me on their stuff.co.nz website showing damage from this event and a photo of the tornado itself that was taken by some tourists in the town at the time. There is also a few images showing damage from a lesser known tornado that went through Greymouth on June 16th 2003! You can view the gallery by clicking here.

Here is a series of photographs taken by Robin Scott the next day in Greymouth, courtesy of Steven Williams.

When looking over model data generally speaking there isn’t huge amounts of instability on the model in regards to the lifted index, mind you surface dewpoints would’ve been a little higher then it would’ve been working with. Surface dewpoints were around 17 degrees. The shear it shows is fantastic, this combined with the effect the southern alps has of uplifting the air and channeling the air at the surface to a northeasterly would’ve created the rotations within the cloud as John Crouch mentions in the article below. If I remember correctly there wasn’t very much lightning associated within this particular cloud at all so that is an interesting aspect. Here is an article from the NZPA that I thought was one of the more useful articles at the time.

The West Coast is New Zealand’s tornado “hotspot”, meteorologists said today after one ripped through Greymouth. “The West Coast is probably the area that gets the most tornadoes,” Metservice forecaster John Crouch said today. This was partly because of the topography, which meant it got a lot of rain and thunderstorms. “We get bands of thunderstorms on the West Coast because we get the colder westerly winds coming in off the Tasman, hitting the land, and air’s getting lifted up so that it becomes quite unstable,” Mr Crouch said. The West Coast experienced a lot of tornadoes because the Southern Alps turned strong winds. “They come on shore as a northwesterly, and at low altitudes they get turned by the mountains into north to northeasterly flow at the surface. “The combination of winds turning as they come on to the mountains, combined with thunderstorms, sometimes allows the thunderstorms to start rotating”. These conditions could lead to tornadoes being spawned, he said. Mr Crouch said that there was an unstable northwesterly flow on to the West Coast at the moment. “It has been spawning thunderstorms, pretty much the length of the West Coast from Karamea down to Fiordland, and there have been several bands (of thunderstorms) moving through this morning. “Today’s tornado has obviously formed on one of these bands,” he said. In June 2003, about 20 businesses were damaged when a tornado cut a swathe through the downtown area and caused damage costing more than $300,000. The 2003 tornado swept in off the Tasman Sea at about 9.45am, wreaking havoc on the western end of the central business district, snapping concrete power poles and knocking over street lights. A similar tornado ripped through Greymouth in the early hours of March 28 2001, wrecking houses. No one was injured then, but glass shattered and iron buckled in some homes.