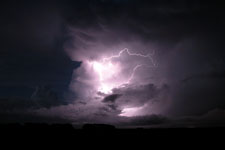 Cold air aloft had been sitting over the South Island since yesterday, on the 4th January there was a late night thunderstorm that had come up the coast south of Christchurch. On that day me and Steven Graham went out late afternoon / evening and saw some Cb’s but nothing seemed to really fire so we went home as it started to get dark and we thought chances had all but gone. Around 2am a thunderstorm did happen where we were but unfortunately I would’ve been asleep!

The very next evening however was a repeat and this time we were prepared to stay out and wait till something happened, it was a good thing we did! This time I chased with Steven Burrows.

I finished work around 4.30pm and Steve came over, we then headed south down state highway one. The decision was made to drive inland behind Ashburton and have a look around but nothing much seemed to be happening at this point, we then did what now seems to be a tradition on storm chases if we can. KFC in Ashburton was the ticket for a feed and we got a twister combo each, twisters and thunderstorms go together right? Haha, maybe it provided the edge we needed as this night proved to be one of best night time lightning shows I’ve ever seen in Canterbury. We then went back inland behind Ashburton and sat there for a while looking at all the nice big clouds going up, unfortunately they didn’t seems to be all that active despite looking great. Steve and me did hear some distant rolls of thunder. There was one main cloud gathering some steam so we focused on that and followed it to the coast at which point it headed offshore, it didn’t seem to do alot.

Sitting on the coast near the Ashubrton river mouth darkness slowly began to develop as time pushed on, hope was fading of any new cells developing as we figured the land would lose it’s energy / heat from the sun of the day. However, all of a sudden an easterly or northeasterly surge developed around 9.40pm and a cloud inland started to brew. We didn’t move strait away but kept an eye on it, by 9.50pm it was the obvious choice to chase this developing cell so we were off inland as it got bigger and bigger, I took a photo of the developing cloud before we went on a little further.


Somewhere half way between the Ashburton River mouth and Ashburton itself we set up as the cloud looked ready to pop, then flash! We sat here in this position for a little while photographing this amazing thunderstorm.

The photogenic aspects of the cloud seemed to disintegrate a little after about 20 minutes so Steve suggested we move closer to the storm to get underneath it, we were on the move and travelled for about 20 minutes to get inland behind Ashburton. The thunderstorm continued to deliver a great show on the way there which I filmed, once in location I got some further great lightning photos but perhaps not as spectacular as our first spot. Some lightning bolts were amazing but they were so bright they overexposed my shots and rendered them useless, didn’t take photos in RAW back then but even then there would’ve only be so much I could do. Me and Steve stayed in this spot for around 40 minutes, heard alot of thunder and saw alot of lightning. Even met up with a local that came down to view the show going on.

The storm seemed to be losing strength after 40 minutes so we moved off following it in some sense although it was hard to figure out it’s exact movement being it was dark and we didn’t have access to any online data, look for the flashes was our only option. There was alot of hail on the road at one point which was cool although we never experienced any hail falling during this chase.

The only options to cross the Rakaia River are near the coast and near the gorge so we travelled towards the coast to cross there then went north and towards home around midnight. One of the best night time thunderstorms I might ever chase in Canterbury, especially because it was slow moving and we got to stick with it for quite a while. Hopefully at some point in the future I get to go after one of these storms again. Enjoy the video below!