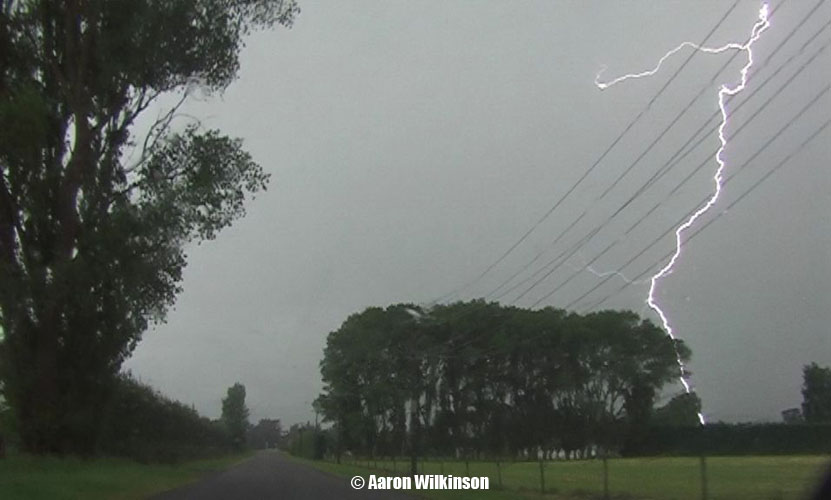 The weekend of the 12th and 13th November 2005 showed promise to be a thundery one in Canterbury. Thunderstorms occurred on both days however we didn’t have much luck with the ones that occurred on the Sunday due to a mixture of us being in slightly the wrong place and they weren’t as vigorous as the ones on Saturday. So here’s a report for the Saturday storms.

We had been keeping an eye on the weather models and saw potential on these days. As the days drew near it appeared Sunday was the slightly better chance to us but infact Saturday turned out better, go figure? Metservice put out a thunderstorm warning in the morning on Saturday which read:

The air mass is expected to cool aloft this afternoon in the wake of a frontal band crossing the area this morning. Afternoon heating and an onshore convergent wind flows are expected to lead to scattered showers and thunderstorms in Canterbury and eastern Otago and also in Southland.

This can be a good situation for Canterbury, you often get a frontal band which crosses over the South Island coming up from the south or southwest. Sometimes the surface winds can go southwesterly but then die down once the band clears, then you get a clearance (some heating from the sun) with light winds or perhaps even a northeasterly may develop awaiting a trough which comes up a bit later in the day. Sometimes the surface winds might not even change to the southwest as was the case this day with the initial frontal band.

So as the clearance developed behind the initial front the sun came out and this provided much needed heating, dewpoints were up around 11 degrees with temperatures around 20 to 22 degrees. Enough to create an unstable atmosphere with the upper air cooling. Stephen Burrows and myself headed south towards Dunsandel then went inland, we set up and watched a nice cell developing infront of us which was producing a gust front.

We observed lightning from where we were and although we didn’t experience any hail on this chase there could well have been some within the core of this cell in the photos above. As the gust front neared the winds picked up quite a bit, we measured sustained wind gusts up to 59kph which is a 7 on the Beaufort scale, near gale. The front part of the gust front seemed to break off from the cell as well.

We left after the gust front went over and chased the storm northeast travelling through to Lincoln and just beyond. We experienced some moderately heavy rain but nothing to rave about, saw some nice lightning bolts which I recorded on video. As the storm moved offshore we observed some lightning coming out the back of it and saw some ok’ish mammatus coming out of the anvil as it slowly went into the distance.