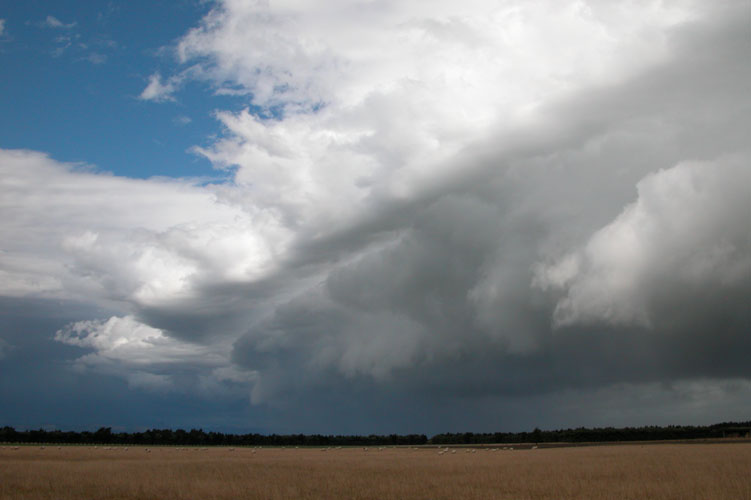 2007 was not a very good year for thunderstorms in Canterbury, only got out to chase two times and this is the only day that resulted in a set of thunderstorms for us. The thumbnail for this day may allude to a spectacular thunderstorm of some sorts but for us it was fairly average where we chased just south of Christchurch. Sometimes storms that aren’t always powerful can be quite photogenic. In town there were reports of surface flooding in quite a few areas, I’ll put a story below that appeared in The Press about the storms that moved through.

Being a Sunday me and Steve were both free, we headed just south of Christchurch and got set up near Burnham to await the southwesterly change coming up around 1pm. We saw some lightning and heard thunder but it wasn’t overly exciting, atleast it was something I spose! A nice inverted u shaped gust front moved over. Steven Graham was also out just south of Templeton and managed to get some lighting on his DSLR camera using a fisheye lens, unfortunately it was quite faint but hey better then nothing once again.

After this gust front moved through nothing felt exciting but we saw some development a little closer to the coast so moved east / southeast. A more direct southerly wind change moved through and with it brought quite a nice looking gust front, there was no thunder associated with this front but it did look good. Steve’s image is to the left and mine the right, by this stage Steve had got a Canon DSLR camera and it does provide a better quality image in this instance. After that we went home and the day was over, a long wait was to set in until any other storms occurred near us again. Not until winter 2008!

The severe weather arrived at noon, with thunder and lightning, accompanied by heavy rain and hailstones up to 10mm in diameter, and strong wind gusts.

The rain caused surface flooding across much of the city, including Eastgate Mall where the main lights had to be switched off while staff worked with mops to clean up.
Dan Fish, from Left Hand Path tattoo parlour in Linwood Avenue, said he and his staff had managed to continuing working, despite water coming into the shop.

“It wasn’t too bad. We were clearing it up with mops and towels, anything we could find really,” he said. “It wasn’t a lot of water, but it seemed to come in waves when a car or a bus went past the shop.”
Fish said it would be a day or two before he would know whether water had seeped under the floorboards, causing any damage.
Lightning strikes caused power breaks around Springston, Rolleston and Woodend, with some areas without power for nearly four hours.
Fierce winds on Lyttelton Harbour capsized a small yacht, forcing its occupants to swim to shore.

The single-masted trailer-sailer had left the Charteris Bay yacht club before the southerly hit, overturning the vessel not far from shore. Several people in motor boats helped the owners pull the yacht to shore at the eastern end of Charteris Bay.
No-one was seriously hurt.

MetService lead forecaster John Crouch said the bad weather had been predicted in line with a southerly change.
Most of the thunderstorms had formed north of Ashburton before moving over Christchurch in front of the southerly winds.
Crouch said two or three thunderstorms had formed very close to each other, producing heavy rain and hailstones up to 10mm in diameter.
The bad weather extended over most of Canterbury, with Christchurch experiencing thunderstorms, hail, heavy rain and gusty winds at noon.
Further storms were expected near Darfield.
Christchurch International Airport had escaped relatively unscathed.
Today was forecast to be fine after clearing overnight, but with cold southerly winds.

A Christchurch City Council spokeswoman said the downpour had caused some flooding, mainly where leaves had blocked drains.
However, there were only minor problems and most areas had cleared quickly, she said.