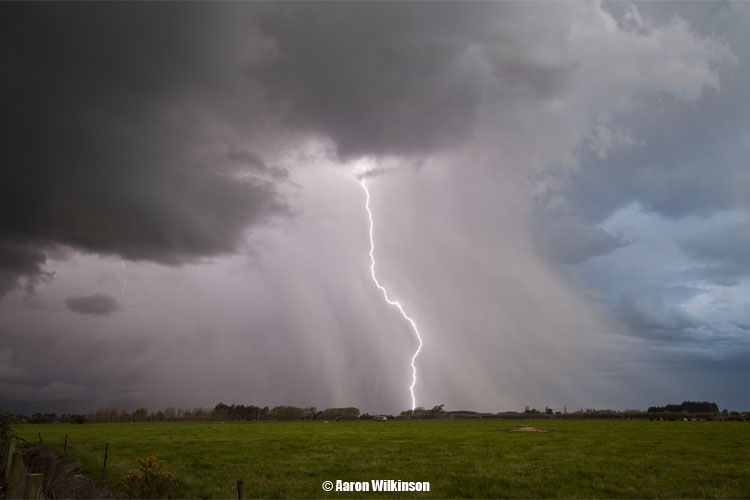 It’s been a busy couple of days, is hard to find time in amongst work and other things to get a report compiled, the day I can earn something from this then I’ll be a bit quicker with updates. lol, but that seems unlikely, then again who knows……


As some may know I work part time at WeatherWatch.co.nz and in an article 6 days before this happened I wrote this.

“Early to mid next week it looks like there may be some cold upper air moving over the country so that could be a period to watch for some thundery development”.

That could be construed as a fairly general statement and it is but at least it shows you can define times a while in advance when you should be keeping an eye out for storms to happen, where they will actually happen is harder to figure out and can only be done a day or two beforehand (I have managed 4 days out though a few times) or on the day in question itself at times. On the Sunday before this happened I could see there was a chance on Tuesday evening in Canterbury more nearer the coast. Only thing though was it was early September and odds are that storms don’t normally start firing that early in the season so while there was a chance I factored that things possibly wouldn’t happen as we had barely got out of winter. Still, I was aware something could happen and kept it in mind.

Come the day in question, morning cloud and southwesterlies eased off and the sun came out, things were looking good. Isolated showers started developing on the ranges of Mid and North Canterbury due to heating and advancing cold upper air, I had work and while some of these showers did turn thundery I was more interested in the trough due late afternoon / evening so gave them a miss. I wrote a story at 2pm on this day and wrote this:

“Today we have cold upper air moving over the country in an unstable southwesterly airflow, this means there could well be some thunder and hail about especially in Canterbury later this afternoon and western parts of the North Island this evening.

Isolated heavy showers are already developing along the foothills from Mid Canterbury northwards through to the hills just behind Waipara and thunder has been heard east of Culverden in the last 20 minutes. This could be more of a prelude of things to come however.

That worked out pretty well for Christchurch late afternoon / evening as the city saw one of the best storms it had seen in ages, some were saying it was a once in 10 year event and in some ways yes but we did have a comparable thunderstorm on the 23rd April 2005 (click here for report) and on the 27th October 2002 we saw an even better storm then the one that has happened in this report. You could even say that on average a storm like this will occur every year or two somewhere in Canterbury, they just don’t always happen in the same place. On the 14th December 2009 a big storm passed near Methven and dropped an 80m wide tornado even.

So enough writing and more details of the day. I chased with mate Mike Stewart after I convinced him something will happen, with the way things were developing on radar to the south around Rakaia I figured we won’t need to go far. Often when chasing I prefer to go with a country type landscape versus the city as I find photo’s have more artistic merit then cars and houses being in the frame, but that’s just my opinion. We ended up just southwest of Lincoln down Days Road I believe.

It slowly got darker and darker with everything developing right near us, couldn’t have got a better spot I believe. From studying the photo’s I can see the area that a mesocyclone formed started about 5.30pm which is indicated in the first photo below, the cylindrical shape in the image. The other lines are just rays of light coming in from the sun out west.

Then que lightning around the same time, unfortunately my lightning trigger wasn’t working properly so I didn’t get any lightning photo’s till about 20 minutes later. I had to trigger the shutter manually so I’m rather pleased with the amount of lightning photo’s I did end up getting using that method as it is more difficult, I could’ve even had more! Oh well. The rotating area is on the left hand side of the photo’s below.

Then que more lightning images, the first photo below shows the meso looking a bit more defined at 5.56pm however after that it became a little more un organised. About 6.10pm it came together again and at 6.20pm it went right overhead of us with an area of rotation clearly visable. There could’ve been a funnel here but when looking strait up at it, it more or less just looked like a swirl. Good thing no tornado formed otherwise we would’ve had to move quick smart.

A lightning still from Mikey below.

A series of images from Ben Rodriguez below, fantastic lightning! Last image of his shows the rotating updraft in the left of the frame, you can see the banding cumulus forms twisting up. That is where we were right below when he took that photograph.

The swirling going on above us is in this video still below, it was definitely rotating. Could’ve been a funnel here but it’s hard to know when looking strait up at it like this, the thing was right above us! Reminds me very much of this day (click “here“) on the 16th October 2004, a funnel went right over us and it looked similar.

The first photograph below shows the storm when it moved over Christchurch city, it really started to unload at this point and literally golf ball sized hail fell in the city. The hail that fell near us was a slightly smaller offering at 10 to 15mm in size. Another cell formed and was coming up giving off some lightning strikes but unfortunately it died lightning wise as it got close.

All in all an amazing storm chase where we didn’t actually have to go that far from home. Every man and his dog has a camera these days so there was a plethora of images that came out after this storm had moved through, many were excellent though. I had work strait after this storm finished so had no time to review what I had gotten.

Our footage below and then the One News report by Alison Pugh on the event including a little bit from me! Yeah yeah I need a haircut and that’s already happened 😀 It was a good thing Mikey was recording with his video camera while out there as I was often busy with my SLR. You can see a time lapse from Ben Rodriguez who was also out and shows the spinning updraft in the left of the frame, we were right under that and explains the twirling skies we saw right above us. And a word of advice if you want a video camera to record lightning, get one with CCD’s and not CMOS sensors, rolling shutter issues with CMOS sensors causes horrible banding in the video which I find a bit annoying and ruins good footage.