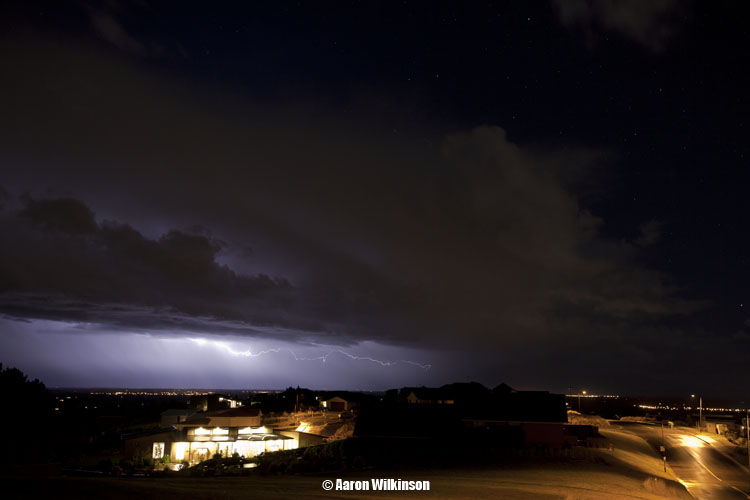 Who would’ve thought, but another little storm chase for myself as we nearly get into winter! Well this time I didn’t really have to go very far so that was a nice change, got some great views to.

A very cold upper pool of air (-30 to -34 °C 500mb) was due to move over the South Island during Monday and with it bringing showers with a chance of hail, thunderstorms looked more likely to me say south of Timaru (which didn’t actually happen, cough cough). Steven Williams (NZStorm) on the New Zealand Weather Forum noted however on Sunday that he believed storms could form on the Mid and North Canterbury coast later on Monday, and when NZStorm says something thunderstorm wise I always take note as he has a vast knowledge of stormy type weather in New Zealand. Still it seemed like it might be difficult as I wondered with it being nearly winter there might just not be enough surface temperature and or moisture there to support storms, NZStorm was right though.

Around 4pm the clouds were looking unstable towards Banks Peninsula, so this showed some promise for the evening cold air.

At 4.30pm a cell had started to come out of the Peel Forest area, why am I not surprised. Just before 5pm it became more organised and lightning started off in a line between Mayfield and Ashburton. I could’ve left home earlier but I was still a little weary if things would actually fire. Once I saw the strikes appear on the tracker I left from my place and by looking at the weather radars determined Birdlings Flat would once again be an ideal place to head to as the showers were moving in an angle towards that direction. Once I got some fuel in Halswell though the clouds looked threatening closer to where I was so I made a change of tack and went up to the top of Kennedys Bush Road instead. As it turns out that cell didn’t become active for that long, I took a photo of it as it approached Christchurch hoping for a rouge lightning bolt to pop out. Some small hail fell when it moved over around 6.30pm. The colours with the twilight in the distance looked quite cool!

Hopes were fading (gee that happens alot with these reports! lol) but I decided to stay up the top of the hill as this line of showers moved over and then cleared, Stephen Burrows was out on the Old West Coast road and we both were talking about a new line that started forming along the length of the Rakaia River on the Plains. We could see it on radar and it came into view in the twilight from my position. Then I saw a flash! With new hope and clearing skies lightning photography chances just went up!

This new line only became active for about 10 or maybe 15 minutes at most, lightning wasn’t overly frequent so I had to make the most of it. I didn’t get any nice big Cg’s unfortunately but got a few goodies. There is a plane moving across the sky in the 4th photo below, that’s the reason for the streak of light in the top left.

Just after 8pm the line was beginning to move over and it started showering again so couldn’t take photo’s anymore apart from inside the car, the cell wasn’t active anymore anyway so all good.

I waited some more but nothing else happened so headed home, on the way that new song with lightning in it started playing so made a small video clip. lol. I wanted to focus on photography versus trying to video at the same time hence I’ve got no video of lightning. I’ll have to get a second tripod set up with the video camera on it in future so I can just leave it running. 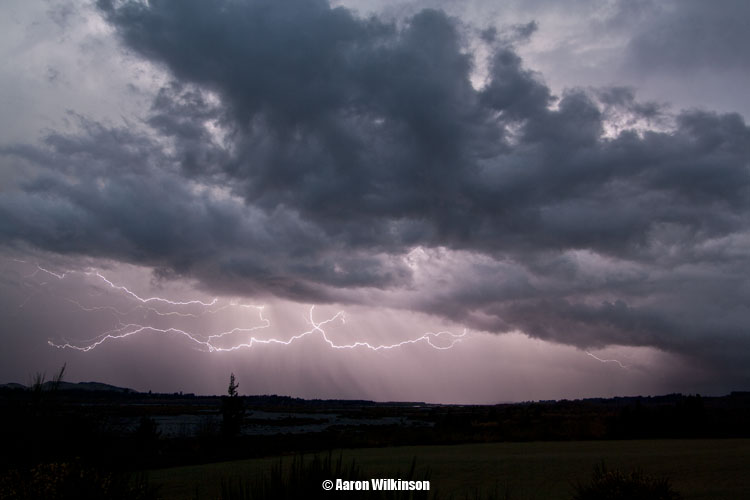 A large depression had been brewing in the Tasman Sea over the weekend and as it moved east over the country it then dragged up very cold air behind it in an associated southwesterly flow.

The west coasts of both Islands had been affected by thunderstorms the previous two days and more was to develop on the west coast of the North Island on Wednesday. Sitting here in Canterbury it was no fun watching other places get thunderstorms but you tend to accept it as we just don’t normally get thunderstorms in the colder months of the year. The day before this event occurred models were not showing any negative Li’s over Canterbury for Tuesday apart from off the coast, neither was there much CAPE. From memory I think the models were showing a small amount of CAPE but nothing worthy of note. The models would’ve been forecasting upper air temperatures fairly accurately but the surface conditions were a little different to what it was thinking I believe. The main ingredient being that surface moisture was a bit higher then it had anticipated. On Monday I saw that total totals were sitting at 55 over Canterbury for Tuesday, now this is quite good for thunderstorms. Only thing I was wondering is that surely storms won’t form this late in the season, and the fact that there would be a S to SW wind already flowing over Canterbury didn’t bode overly well either. However, as I woke up on Tuesday you could see it was quite sunny with nice cumulus clouds going up. Conditions were quite calm with the SW breeze only faint and the dewpoint was a bit higher then I originally thought it might be, immediately thunder chances just went up!

I could see a cell forming out of the Mount Peel area (surprise surprise) around 1pm so I got some gear together and headed out. Another check of the radar when I was further south and I could see it had moved near the Rakaia Gorge, surely enough this cell came into view so I knew where to head to. Scferics started flaring on the radio to so it was now active. I turned right and travelled along the northern side of the Rakaia River inland, on the way I noted a Cg come out of the cloud. Once there I saw a little bit more lightning as I set up but didn’t see much else apart from the dark cloud.

I was hoping I could do some lightning photography with my lightning trigger but low and behold the 9V battery in the thing was flat! Arghhh, this was no good. And I forgot my shutter trigger thingy, double arghhh. Still, if lightning went off later when it was darker I could just press the button on the camera and hope I was steady enough for a long exposure.

Stephen Burrows finished work and headed inland about 4pm to near Darfield, he took a nice photo of a Cb that was offshore to the SW. While things weren’t overly active it seemed like a dark heavy anvil was spreading northwards along the foothills coming out of this Rakaia Gorge cell. Steve noted it was looking good from his position so I made the decision to head towards him. On the way I pulled into Hororata and got a 9V battery at the garage there, thank goodness for that as it would come very much in handy! Scferics started going off again, I moved into position near Waddington about 6pm as the clouds looked good. Didn’t see any lightning but me and Steve both thought the sky did look a bit suspect with some twirly motions going on, a funnel looked to of developed for a time but we can’t be confident it was an actual funnel and not just a piece of cloud that looked like a funnel. It did last for a little while though and stayed the same roughly as it moved into the distance so maybe? Atmospheric wind conditions didn’t look likely to support tornadoes but small funnels can form out’ve any thunderstorm at times.

Steve was running out of fuel so we had to go back to Darfield to fill up. I went to the Waimak Gorge as I figured it would be a good place to photograph the clouds and any potential lightning that might happen. Big Cg’s started going off as I was on my way there so hoped that this was a good choice. It was a good thing I got that 9V battery as I needed it for my lightning trigger. I set up and got some great lightning strikes but no good Cg’s, also videoed aswell. In hindsight I might’ve been better placed back towards Darfield but oh well. In saying that when one blows up these images and turns it into a panorama they look pretty cool!

The cloud base where Steve was near Darfield looked really manky and dark, I could sort’ve see it from my position at the gorge and knew what he was on about. It reminded me and Steve of a cloud base that came from a storm Bob Crowder (New Zealand thunderstorm Society) went after back on 11th March 1999, this cloud produced a tornado near Ruapuna (Mayfield). Steve’s photo on the left, Bob’s on the right below.

A spectacular Cg photo was taken by Rob Dickinson near Darfield, you can see it here.

The lightning to my east / north was not firing anymore so I headed to the cell with the dark ragged base near Darfield as it was still going off. Saw an amazing Cg on the way there but unfortunately that was it and I didn’t see anymore close lightning for the rest of the night. A fair bit of hail had fallen around Darfield which made driving dangerous at speed, so one had to slow down. I met up with Steve to check the the radar and lightning tracker, we could see the storm was now moving offshore up along the coast. People in Kaikoura would’ve got some nice lightning that night aswell off the coast. We called it a day and went home, a great chase to start the beginning of winter!

Ben Rodriguez was sitting up the top of Kennedys Bush Road in Halswell and got this shot of the Cumulonimbus cloud that was over me and Steve to the West around 6.20pm, a nice big dark cloud indeed!